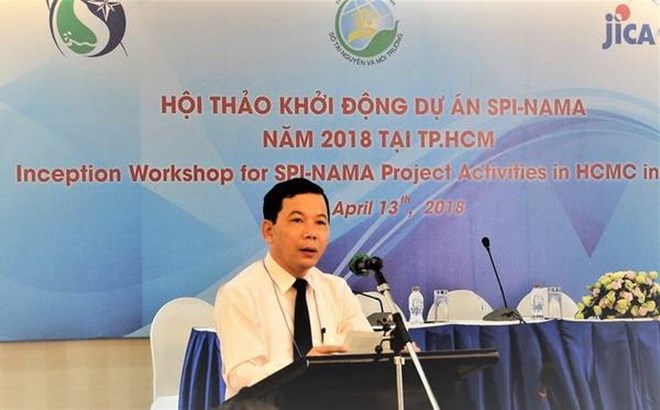 A seminar was held in Ho Chi Minh City on April 13 to launch a 2018 Project to Support the Planning and Implementation of the Nationally Appropriate Mitigation Actions (SPI-NAMA).

The event was co-hosted by the MoNRE, the municipal Department of Natural Resources and Environment and the Japan International Cooperation Agency (JICA)’s Office in Vietnam.

He said the city plans to refine legal regulations on emission reduction, enhance global cooperation, attract investment and improve management in the field.

He said between 2021-2030, Vietnam has pledged to reduce 8 percent of greenhouse emission, or nearly 62 million tonnes of carbon dioxide, with only domestic resources, and 25 percent with global support in the fields of energy, transport, agriculture and wastes.

By 2015, the country will reduce greenhouse emission by 45 percent, increase the use of renewable energy to 44 percent and forest coverage by more than 50 percent.

In order to achieve above targets, Vietnam has taken 45 mitigation measures with the use of necessary resources and technology.

The MoNRE has submitted a Decree on greenhouse emission roadmap to the Prime Minister for approval this year.